It is curious how a flower, so often photographed and enjoyed in summer, can have such poignant and painful meaning by November. The poppies during June and July create a beautiful shimmering scarlet colour en masse. They are like a vibrant, earthbound sunset. As I write harvest is beginning, a full month earlier than we usually expect on our Suffolk farm. This summer has been burning hot and unforgiving but, despite this, the poppies are flowering in the cornfields and on their margins. They are highlights in the fields of gold.

Weeds and Flowers
As a girl I was taught that the poppy was a weed. It was a vociferous one too! Even now when I see fields of poppies and feel joy at the sight I feel a pang of disloyalty. For my farming parents it meant a poor crop. Despite that, the flower held a fascination. Was I the only one to pick the delicate, tissue-like flowers to try to capture their vibrancy and colour? I remember carefully carrying home a few flowers for my mum, only to find that all the fragile petals had fallen before I had even left the field gateway. The poppy, therefore, is full of contradictions. It is a weed, yet a joy. It endures in the ground yet it disintegrates easily once picked. It reminds us of resilience and, also, frailty.

Symbolism of the Poppy
The message of the poppy in our times has been dominated by the memory of Flanders Fields in WWI. Fields of poppies sprung where the trenches were dug and so many died. The flower has become the symbol of sacrifice, spilled blood, death and, to some, the futility of war. When we look at those poppies we are reminded of the millions who lost their lives, just like the multitude of seeds in the poppy.
Even before this century it had an association with a story of loss and sacrifice. Poppies were worn by the Greek corn goddess, Ceres. Her tale was a sad one, for her daughter, Persephone, had been abducted by Hades, Lord of the Underworld. Inconsolable, Ceres trod the earth searching endlessly for her daughter. She became exhausted, crops failed and the earth became barren. Finally, she drank a potion made of poppy seed so that she was able to lie down to rest. Ultimately, the gods returned her daughter to her for nine months of the year, but Persephone had to live in Hades for the remaining three months and that is when we, like Ceres, suffer the winter.

Poppies, depression and inner strength
It seems to me as I walk in summer, that the poppies are rather like the suffering of someone with depression. Most people have struggled with this illness at one time in their lives. On the outside we may seem bright and happy and in rational minds we may be joyful like the red flower, but just like the poppy when it is picked, it is amazing how quickly the petals can fall stripping us of our joy, taking us back to our inner fears, sadness and insecurities. Just like Ceres we may long for the sleep and relief from pain that the poppy gave her.
So, when we see the red poppy, it is a reminder of the transience of life and our own frailty. Perhaps, ever the optimist, I recall how it serves to remind us of sacrifices others have made for us in order that we do our best in life. I live in hope that the joy it gives us as it blooms sustains us and that the blaze of red we see each summer renews our passion and strength. 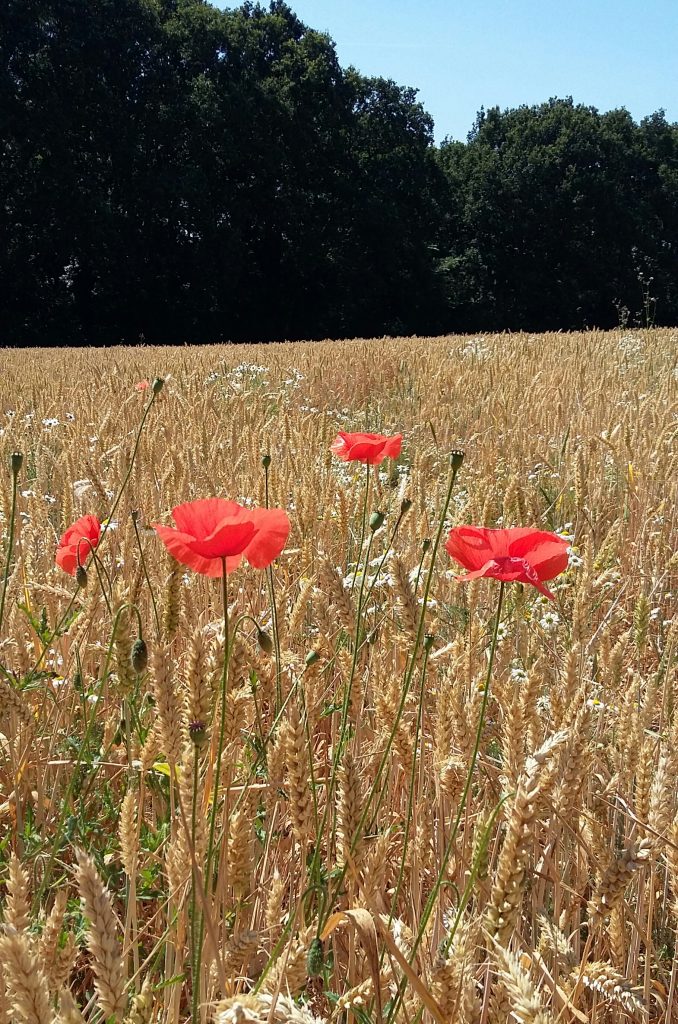 Download my free ebook ‘How to connect with the Flowers’ here.

« Bluebells and their Meanings
Sunflower – a sign of Optimism and Joy »

This site uses Akismet to reduce spam. Learn how your comment data is processed.

My name is Ruth Goudy.
I am a professional garden writer and speaker. I have run a nursery and garden centre for twenty years with my husband and this inspires me to share the joy I feel when I am around nature and flowers. I am on social media and Youtube and would love you to follow me. I believe flowers are good for our wellbeing and the more people that are involved in the conversation about it the better!
Read More…

Download my free ebook ‘How to connect with the Flowers’ here.

Snowdrops on candlemas day. You can read my blog a

No filter needed for this blue sky. Thank heaven

This Escallonia was another rogue flower at the sh

Living my best life with my husband. Visiting pla

At a plant show today and Cheryl's Shine was a win

Download my free ebook ‘How to connect with the Flowers’